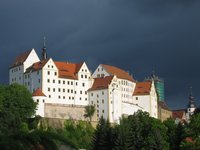 Seat of sovereign power, hunting lodge, widow’s residence, with its white gables Colditz Castle is one of the most beautiful and stylistically pristine architectural monuments of 16th century Central Germany. Nowadays when groups of travellers from around the world flock to the castle and its grounds, it is not only because of an interest in Renaissance architecture. Often the reason has more to do with recent history, because during the Second World War the spacious castle was an important internment camp for high ranking officers of the Western allies. It was later to become world famous thanks to the book “The Colditz Story” and the film of the same name.

The imperial fortified settlement, or “burgward”, at Colditz was first mentioned in the 11th century. The earliest known construction work for its transformation into an imperial castle began in the 12th century. In 1404 Colditz Castle and its territories were sold to Margrave William I of Meissen by the Colditz family. From 1464 onwards, the imperial castle was rebuilt under the Saxon electors into a prestigious late-Gothic castle. Large parts of the castle were repeatedly ravaged by fire, notably in 1504. Between 1519 and 1525 Elector Frederick the Wise had the complex converted into one of the largest Renaissance style castles of Middle Germany. From that time until his death Frederick and his brother Johann often stayed at Colditz. Towards the end of this golden period from 1603 to 1622 the castle was the residence of Sophie of Brandenburg, the widow of Christian I.

From the beginning of the 19th century until 1996 Colditz was used as a workhouse, an insane asylum and a hospital. During World War II it became a prisoner of war camp (Oflag IV C) for Western allied officers.

Colditz Castle is one of 19 cultural monuments which have been entrusted by the Free State of Saxony to the "State Palaces, Castles and Gardens Sachsen non-profit GmbH".