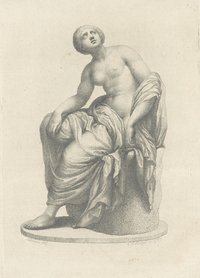 "In Greek mythology, Niobe (/ˈnaɪ.ə.biː/; Greek: Νιόβη [ni.óbɛː]) was a daughter of Tantalus and of either Dione, the most frequently cited, or of Eurythemista or Euryanassa, and the sister of Pelops and Broteas.

Her father was the ruler of a city located near Manisa in today´s Aegean Turkey that was called "Tantalis" or "the city of Tantalus", or "Sipylus". The city was located at the foot of Mount Sipylus and its ruins were reported to be still visible in the beginning of the 1st century AD, although few traces remain today. Pliny reports that Tantalis was destroyed by an earthquake and the city of Sipylus (Magnesia ad Sipylum) was built in its place." - (en.wikipedia.org 12.01.2020)