"Proserpina (/proʊˈsɜːrpɪnə/ proh-SUR-pin-ə, Latin: [proːˈsɛrpɪna]) or Proserpine (/proʊˈsɜːrpɪni, ˈprɒsərpaɪn/ proh-SUR-pin-ee, PROSS-ər-pyne) is an ancient Roman goddess whose cult, myths and mysteries were combined from those of Libera, an early Roman goddess of wine, and the Greek Persephone and Demeter, goddesses of grain and agriculture. The originally Roman goddess Libera was daughter of the agricultural goddess Ceres and wife to Liber, god of wine and freedom. In 204 BC, a new "Greek-style" cult to Ceres and Proserpina as "Mother and Maiden" was imported from southern Italy, along with Greek priestesses to serve it, and was installed in Libera and Ceres´ temple on Rome´s Aventine Hill. The new cult and its priesthood were actively promoted by Rome´s religious authorities as morally desirable for respectable Roman women, and may have partly subsumed the temple´s older, native cult to Ceres, Liber and Libera; but the new rites seem to have functioned alongside the old, rather than replaced them." - (en.wikipedia.org 30.01.2020) 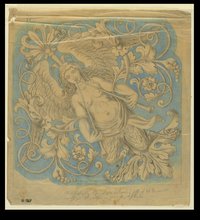